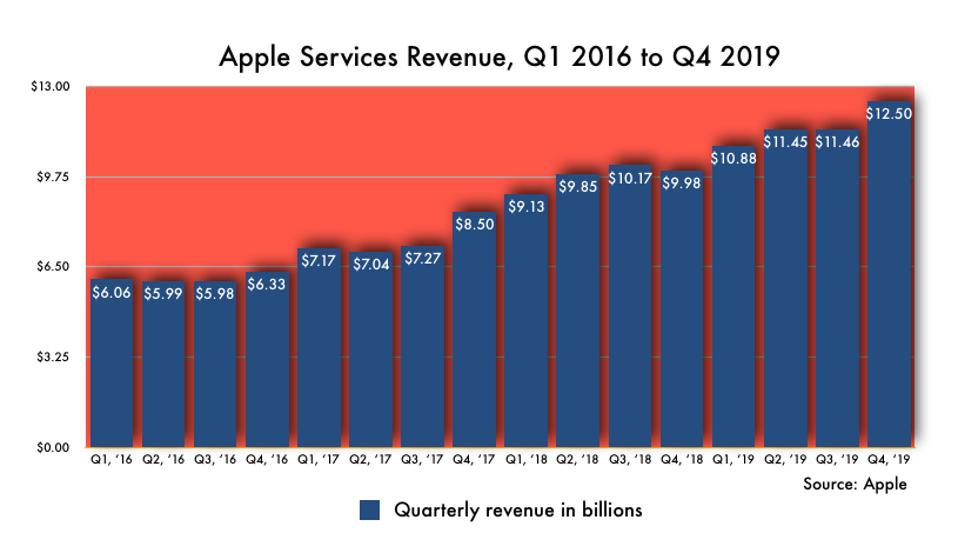 Tucked into Apple’s solid fourth-quarter earnings this week was more startling evidence that its pivot beyond the iPhone’s hegemony is paying off: It took Apple just three years to double the revenues it takes in from “Services.”

On Wednesday, Apple reported its fourth-quarter earnings, including $12.5 billion in revenue from “Services,” a catch-all category in Apple financials that includes digital offerings such as iCloud, Apple Care, the iTunes Store, Apple Music and News+.

That’s a big number, the equivalent of a really big company with around $62 billion in revenues if it were a standalone organization. Instead, it’s just a fast-growing corner of one of the world’s biggest and most profitable public companies.

Even more surprising is how fast Apple’s services revenues have taken off. Just three years ago, in Q4, 2016, the company reported $6.3 billion in Services revenue, roughly half this quarter’s number.

The Q4 2019 services revenues were up 18 percent from the same quarter a year ago. And in fact, on a year-over-year basis, the company has been able to grow services revenue every quarter since the start of 2016.

The scary part may be that the Services sector could grow a lot more in the coming months for Apple.

This month, Apple debuted Arcade, a $4.99-a-month video game subscription services that has received extremely strong reviews (I’ve tried a few of the more than 100 titles; they’re uniformly very good, and represent a welcome and dramatic change in the free-to-play business model that predominates in mobile games).

During this week’s earnings call, Apple executives said they were extremely pleased with the initial critical response to and customer uptake for Arcade. But they said that 30-day free trials for early adopters are just now beginning to expire. They offered no guidance on how many of those initial customers will re-up now that the subscription kicks in.

And Friday, Apple launches TV+, its $4.99-a-month subscription video-on-demand service. Critical reviews for the initial handful of shows have been mixed, unsurprising for a first try by a company with no significant history of TV production and self-imposed limits on acceptable programming topics and tone.

Regardless, as I’ve written, Apple could quickly add 100 million or more subscribers to TV+ in the coming year, because it’s giving away free one-year subscriptions to anyone who buys an iPhone, iPad or Mac.

It’s harder to predict how many paying subscribers will jump on, or stay on after trying out a couple of shows. Pre-launch studies have been all over the place when looking at consumer appetite for all the new SVOD services coming in the next few months. Mostly, they suggest a limit to how many services consumers will pay for.

Apple certainly will get some people willing to pay for TV+, at least for a few months, given a string of big-budget shows featuring big-name actors and creators. Some may stick around even longer, given Apple’s release strategy that dribbles out some shows on a weekly basis rather than all at once.

And Apple is counting on some of those people to use its TV app to also subscribe to third-party channels such as Showtime, HBO and Amazon Prime. Apple takes an initial 30-percent share of that third-party revenue.

But it’s important to remember that the iPhone still rules everything, just less forcefully than it did during a decade of dominance. In Q4, iPhones comprised more than half of all revenues, at $33 billion of the record $64 billion.

Given strong initial sales of the newest iPhones, then, expect the real driver of near-term Services revenues to be an accounting detail: all those “free” subscriptions will count as $60 to Services rather than hardware. That may keep accountants happy, but likely will confuse people tracking hardware revenue trends.

The actual bottom line, however, should be powerful regardless of where the revenues are credited. Certainly the markets think so. Egged on by Apple’s own executives, they’ve been flirting with a one-year high in prices since the earnings were announced.

“We concluded a groundbreaking fiscal 2019 with our highest Q4 revenue ever, fueled by accelerating growth from Services, Wearables and iPad,” said CEO Tim Cook. “With customers and reviewers raving about the new generation of iPhones, today’s debut of new, noise-cancelling AirPods Pro, the hotly-anticipated arrival of Apple TV+ just two days away, and our best lineup of products and services ever, we’re very optimistic about what the holiday quarter has in store.”