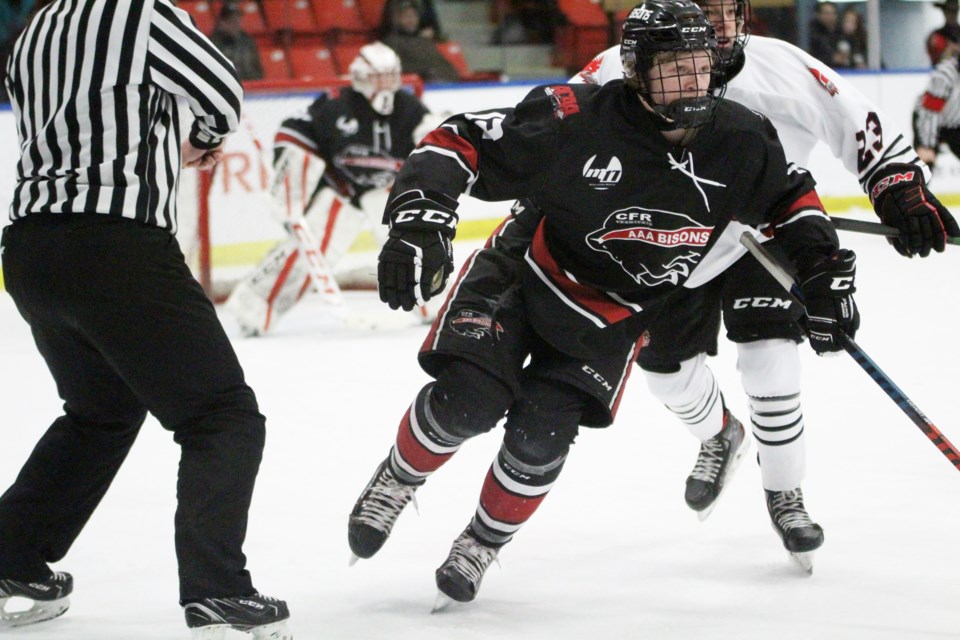 There were no wins to boast of, but the Airdrie CFR Chemical Bisons hockey team left the ice with many lessons learned at the 42nd annual Mac’s AAA Midget World Invitational Tournament in Calgary, Dec. 26, 2019, to Jan. 1.

Participating in the prestigious tournament for the third year in a row, Airdrie’s top U17 boys’ hockey team competed to a 0-3-1 record in Pool 4, failing to make it out of the group stage. While the team didn’t put any wins on the board, head coach Dustin Taylor said the experience will give the Bisons a boost as the team moves forward with its season.

“How it’s helped us is just seeing what it takes to be at that level,” he said. “We’re a young team, and we have 15 players that are either 16 or 15 years old. The potential for them to come back next year is high.”

With just three returning players from last year, when the Bisons made it to the quarterfinals at the Mac’s tournament, the Bisons’ youth meant the team struggled against some of the best midget teams from across Western Canada.

“This is a learning year for us to [experience] what it’s going to take – to see what that level is and coming back next year knowing what the bar is,” Taylor said.

The Bisons entered the tourney on the back of a bruising first half of the 2019-20 season. With just three wins in the first 22 games of the Alberta AAA Midget Hockey League (AMHL) campaign, Airdrie went into the Christmas break at the bottom of the Chrysler South Division, 11 points shy of a playoff spot.

Airdrie’s tournament got off to a rough start on Boxing Day, with the team falling 7-2 to the Cariboo Cougars – the third-placed AAA midget team in the British Columbia Major Midget Hockey League.

The losses continued with a 6-2 setback Dec. 28, 2019 against the St. Albert Raiders – the defending Mac’s champion and the current top team in the AMHL.

“No question, you play better against better teams,” Taylor said.

Despite the squad’s lack of on-ice success, 16-year-old center Alex Bend said morale was high in the Bisons’ dressing room throughout the tournament.

“It’s been good – we definitely stepped it up a level [as the tournament went on] and it’s going to help us with our league play, for sure,” he said.

The Bisons’ shot at making the quarterfinals was dashed Dec. 29, following a 5-2 loss against the Moose Jaw Warriors – the table-topper of the Saskatchewan AAA Midget Hockey League. Airdrie’s two goals came from Hunter Bergeson and Haiden Parks.

“We had a hard-fought battle,” Bend said. “Some pucks didn’t go our way, but we still played a solid game for 60 minutes.”

With three losses, the Bisons had only pride at stake in the final round-robin game Dec. 30, against the Calgary Royals. The consolation match-up determined which team would end the tournament at the bottom of Pool 4.

“There’s an academy tie there, too, as Global Sport Academy is attached to both programs, so there’s some internal pride to play for,” Taylor said.

In the end, neither the Bisons nor the Royals came away with those bragging rights, as the two battled to a 2-2 draw.

Bend, a first-year forward with the Bisons, said it was an honour to play at the Mac’s tournament – one of the most well-known minor hockey tournaments in North America. Many NHL players and alumni featured at the tournament during their minor careers, including Sydney Crosby and Jarome Iginla.

“It means a lot – there are way more fans at the games than usual,” he said. “I volunteered at it last year, and it was awesome watching it and hoping I’d get to play in it.”

The Calgary Buffaloes ultimately came away with the Mac’s title on New Year’s Day, downing the Warriors 6-2 at the Scotiabank Saddledome.