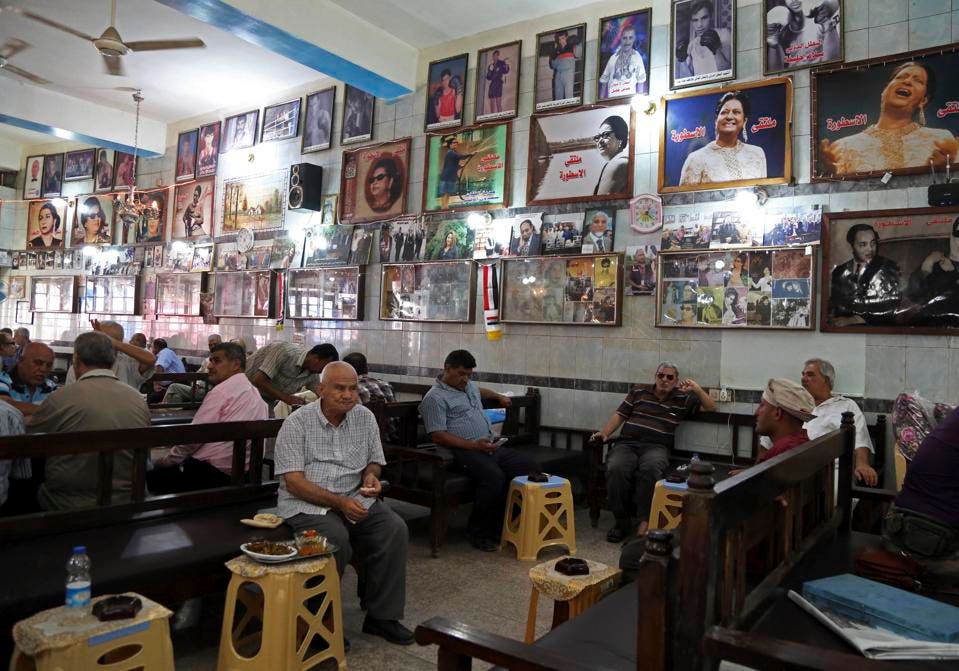 Patrons sit inside a cafe at al-Rasheed street, the oldest street in central Baghdad, Iraq, Tuesday, July 26, 2016. The Om Kalthoum cafe opened in the beginning of the twentieth century in the Iraqi capital. (AP Photo/Karim Kadim)ASSOCIATED PRESS

When I hear of people going to Egypt “on holiday” I am always surprised to hear of those who spend their entire time in the Valley of the Kings in Luxor or on Memphis Tours through which the tourist is shown an Egypt long ago vanished. While the sphinxes overlooking Luxor and the pyramids of Giza are as much a part of Egypt’s vast history as is Om Kalthoum’s voice or Naguib Mahfouz’ stories, I cannot help but think that recent history would capture the attention of tourists at least as much as the search of the tomb of Queen Nefertiti. Perhaps it is that I have difficulty in focussing uniquely on Egypt’s past over its very rich present as I would much rather pass on the pyramids than on a serving of koshari (street food made of rice, lentils, pasta and chickpeas topped with a spicy dakka sauce and fried onions). After all, what do ancient mummies and hidden tombs have to do with the Egyptian revolution of 2011 or the massive urban and political symbolism Tahrir Square?

December 1999, I produced and directed a film on the end of the millennium—an ethnographic interpretation of time, of Ramadan, and the city of Cairo, appropriately entitled The Last Days of Cairo. While filming I met some of Egypt’s luminaries among which Zahi Hawass, Egypt’s famed if not controversial specialist in Egyptology and the former Minister of Antiquities. Hawass offered me a tour of the pyramids of Giza and entertained me one evening with an honorary shisha (a glass-bottomed water pipe) and sahaleb (a milk, rose water and pistachio drink) as we sat next to Adel Emam Egypt’s preeminent comic actor and listened to stories of Egypt’s ancient past. And what better place to discover Egypt’s history than in one Cairo’s thirty plus thousand qahwas or coffee houses, what Max Rodenbeck describes as “the one Cairo institution is more common that than the mosque.”

What is most fascinating about Egypt is that when you live and work there, the ancient cultures are residually present but still very outside of the present day reality of the streets, the smells, the bustle, and the country’s lively underground music and art scene. The layering of myriad dynasties and various religions over the centuries lends to Egypt’s present—a rich tapestry in which prehistoric, Greek, Roman, Coptic, Byzantine, Nubian, and Arabic elements co-exist. While the 13th century BCE (Before the Common Era) sarcophagus has little to nothing in common with the songs of Om Kalthoum, Egypt’s most important singer from the past century, this is Egypt’s legacy—a country of contradictions where the recent discovery of a 3,000 year-old mummy will like shed absolutely no light upon Egypt’s present-day political or cultural relevance, but which will nonetheless be part and parcel of that territory of Egypt’s past. After all, it is is impossible to anywhere in much of the country—or anywhere from Morocco through to the Persian Gulf for that matter—and not hear Om Kalthoum’s voice on scratchy recordings. Nor can one move through the country without realizing the importance Om Kalthoum had on Egyptian history to include Gamal Abd El-Nasser having supposedly consulted with his friend regarding the Si-Day War of 1967.

What binds Egypt’s past to its present was foretold in the 1930s by Egyptian writer, Taha Hussein (also spelled Ḥusayn) who stressed that Egypt had to reform its education system after having attended Cairo’s al-Azhar University in Cairo where his excitement for learning waned by what he regarded as stale lectures resulting in “soul-destroying boredom.” He was kicked out of al-Azhar and eventually finished his education at the newly constructed Egyptian University (today Cairo University) before leaving for his doctoral studies at the Sorbonne. While Hussein rebelled against the monolithic education he found at al-Azhar, he later came to see the problems of western education as well, devoid of any knowledge outside of its own insularity. As a result, in his 1938 book, Mustaqbal ath-Thaqafa fi Misr (The Future of Culture in Egypt), Hussein wrote that there was, in fact, no cultural divide between Europe and Egypt, elaborating the importance of integrating western history, science and philosophy with Arabic thought. Along with Mahfouz, Hussein was one of the early proponents of liberalism in Egypt stating that Egyptian modernity could only be accomplished with a reconciliation of the past with the present and of western with the Middle Eastern traditions. Later as Minister of Education in 1950, he worked to obtain education for every child in Egypt. Today Hussein could be regarded as someone who envisioned the central role that education and science would have in bridging Egypt’s cultural divides still present today. Class, ethnicity, religion, and wealth are still factors plaguing the world’s societies, and Egypt in this way is no different than most other western nations.

And this is where Egyptology is in perfect synchrony with contemporary Egyptian culture as we are now aware of the innovations of Egyptian engineering and maths in creating some of the most important architectural structures in the planet’s history. From the vast engineering feats performed to maneuver the heavy stones of the pyramids into place in 2,500BCE by stone pulleys to the theories of hardwood moveable beams which created a rope roll, it is precisely because of this older technology that we have today’s technology which allows the representation of contemporary Egyptian culture. While the ancient Egyptians are responsible for many glass-making techniques, black ink, woven textiles, locks, and one of the oldest medical treatises on surgery most of which were adopted in Europe, it becomes difficult to reconcile Egypt’s pre-Islamic past with the recent era that had Hussein experienced when he rebelled against the clerics of al-Azhar. Still, we need only to scan how the technology of two thousand plus of years ago has made way for the current technologies of today. Even the recent discoveries of historical information from ancient Egyptian civilization are made possible through paleopathology which includes myriad scientific methods from carbon dating, x-rays, and ground-penetrating radar (GPR) used to detect mummies and chambers in pyramids. We know of Egypt’s rich history because of its technological present which expands far beyond mere innovation in its use of various technologies in  broadening the country’s complex, evolving information revolution that transformed world politics in 2011 and which is currently undergoing a renaissance of production of high tech as Egypt undertakes the production of fibre optic cables and is itself home to some of the most interesting digital technology startups.